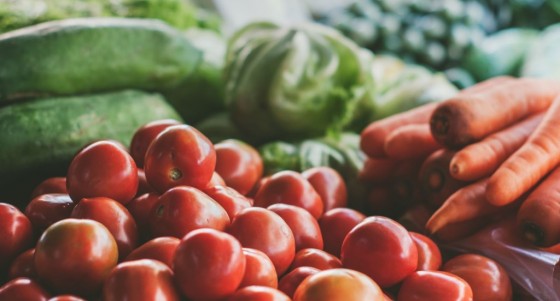 “If you want to love Italian cooking, you have to love the tomato.”

I sat at a table on the platform at the station of Villarosa in central Sicily. The table was covered with a paper cloth and set with a knife, a fork, a side plate and a tumbler. I had bread and wine. A small, scrawny cat sat silently beside me. Sparrows skittered among the metal struts above me. Clouds moved shadows across the tanned and gold hillside beyond. And then came the unmistakable perfume of frying onions and bubbling tomato, rich, velvety, slightly rasping, slightly cloying, carrying the promise of flavour to coat the fat tubes of penne I was going to eat – penne con salsa di pomodoro, salsiccie e ulive. What a beautiful thing the tomato is, I thought. 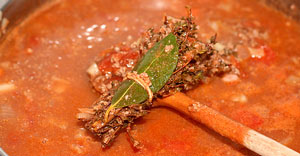 Tomatoes: round, squat, tomatoes like gurning faces, plum-shaped, plum-sized tomatoes, grape-shaped, grape-sized, tomatoes the size of baking potatoes. Tomatoes red, orange, green, reddish-orange streaked with green. Shiny, perfect tomatoes, tomatoes cracked and fissured. There are fresh tomatoes, dried tomatoes and tinned tomatoes. There’s polpa, passata, concentrato, doppio concentrato, and ‘strattu, Sicily’s extreme tomato paste. There’s sugo (straight tomato sauce), ragu (tomato and meat sauce) and sugo al carne (tomato sauce in which hunks of pork, veal and/or beef, have been quietly stewed, allowing the meat juices to quietly permeate the vegetable mass). There are even sauces made by roughly chopping raw tomatoes. The culture surrounding tomatoes in Italy surpasses anything in the food universe for variety, ingenuity, and splendour, subtlety and downright deliciousness. ‘It is the lifeblood of Italian food’, writes John Dickie in Delizia, an iconoclastic analysis of Italian food, ‘– some would say of Italians themselves.’

This cultural transfusion got off to a pretty slow start. The fruit (technically, a tomato is a fruit) first arrived from the New World in the early 16th century (along with potatoes, maize, chillies, chocolate, tobacco, vanilla and venereal disease). Pier Andrea Mattioli of Siena first mentions pomi d’oro – golden apples – in his commentary on the Greek herbal of Dioscorides in 1568. At around the same time, the naturalist, Costanzo Felici noted that tomatoes could be cooked like eggplants, adding al mio gusto e piu presto bello che buono (to my taste they look better than they taste). Until the mid-18th century, they seem to have been more of a curiosity than anything else as far as the Italians were concerned, and there are few illustrations except in herbals and books on botany. The Spanish were quicker off the mark – Murillo featured them in a painting called ‘The Angel’s Kitchen’ (1646) in which angels are portrayed preparing a meal. The very first Italian recipe for Spanish Tomato Sauce appeared in Lo Scalco alla Moderna by Antonio Latini published in Naples in 1692, but Latini didn’t give the tomato a thundering endorsement. That had to wait until 1775, where the tomato is treated with culinary understanding in Il Cuoco Gallante by Vincenzo Gallante. After that, the conquest of the nation was rapid.

Indeed, so ubiquitous is the tomato in Italy’s regions and its dishes, that the visitor may well get the impression there is precious little else to Italian cooking, and rather tire of its repetitions. While eating my way around Sicily some years ago, I was beginning to feel that way as tomato sauce with or without anchovies, with or without garlic, with or without parsley or oregano, with or without anchovy and garlic and parsley or oregano, or perming any two or three of these ingredients, was making for a rather monotonous diet in my view, when I had a revelation. Tomato sauce is to Italian cooking what gravy is to ours. Taking the basic cooking juices as a base, we transform them into sauces of wildly differing kinds by adding cider or beer or wine or mustard or flour or red current jelly or a whole host of other ingredients. The differences between these variants are as great as those between tomato sauces, and are as baffling to Italians as tomato sauces are to us.

So, if you want to love Italian cooking, you have to love the tomato. Like pasta, it became one of the nation’s universal foods, used as extensively in the cooking of, say Emilia-Romagna, as it is in the cooking of Calabria (that may be a slight exaggeration, but only slight.) Italian cooking is defined by locality, and by locality I don’t mean this region or that, but this valley, this hillside, this village and even this family, and each locality has its own favoured varieties for use in favoured recipes. 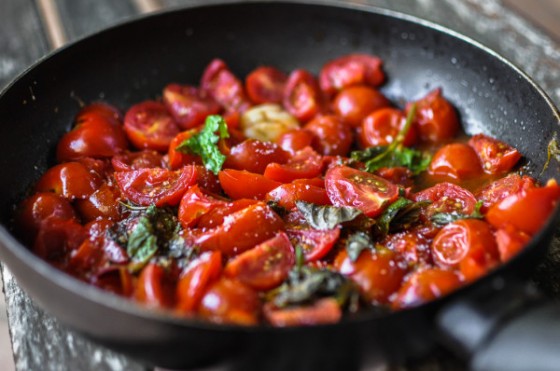 Pomodorini di Cerignola are used for making raw tomato sauce. Cuor di Bue or Palla di Fuoco go into salads. Pomodorini a Piennolo are small and pointed and grow in large bunches which are hung up to dry in summer for use in winter. Plum tomatoes would only be used for canning or to make passata and never eaten raw. (As a general rule, whole tinned tomatoes are better avoided as they tend to be picked when they’re just short of ripe so they will keep they’re shape better in the tin. Broken tomatoes or tomato pulp make a better, sweeter tomato sauce because they were riper when picked). The most famous plum tomato of all, San Marzano, grows to brilliant intensity in the potash-rich soils of Mount Vesuvius, are the tomatoes of choice for the pizzaioli of Naples. They grow on short stems and ripen very rapidly, helped in part by the heat reflected from the ground they are growing just above. There are even uber-tomatoes, such as those from Pachino in Sicily, now so sought after that they’re too expensive for the locals to buy.

But these deeper thoughts and considerations never crossed my mind as I wiped the last smears of sauce from my plate on the platform at Villarosa. I just relished that rollicking savoury sweetness, the true, deep beauty of the tomato.

This guest blog post is brought to us by Matthew Fort of Luke Irwin Rugs Ltd.
See the original post here.