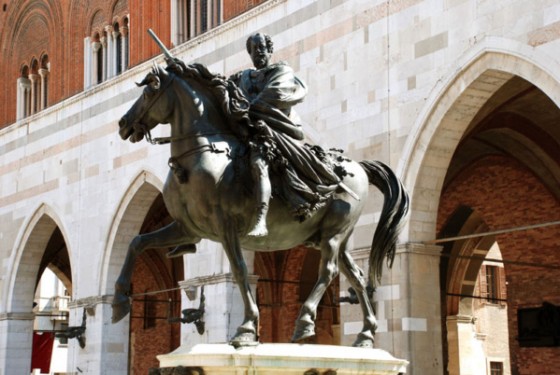 In Italy, art is definitely not confined to the museums and the churches. It is everywhere. A house opposite the church od Sant’Eustachio in Rome, more or less round the corner from the Pantheon, in the very heart of the city, still retains quite substantial elements of the frescos applied to its façade by Taddeo Zuccaro in the second half of the sixteenth century.

Most of the al fresco art that surrounds one is sculpture. In our health and safety/conservation-fixated age, the idea of masterpiece taking their chance in the open may indeed seem foolhardy, but the fact is that they have survived remarkably well over the centuries. It is true that three pieces were broken off the left arm of Michelangelo’s David during an anti-Medicean rebellion in Florence in 1527, and rescued by two young artists, Giorgio Vasari – of Lives of the Artists fame – and his friend Francesco Salviati. More generally, however, the sheer weight of large-scale marbles and bronzes means they are hardly likely to be pinched by even the most determined thieves. On the contrary, the most common reason for any such disappearances is a forgivable desire to protect such works from the elements. 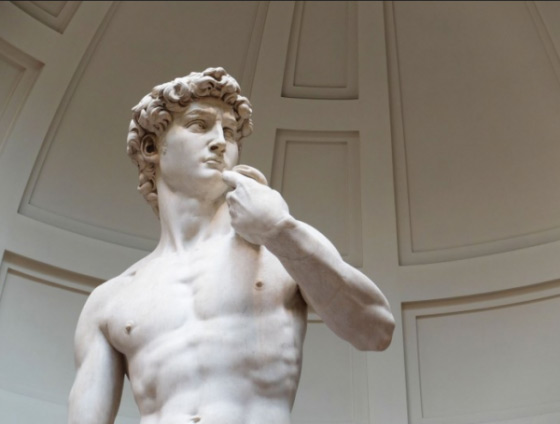 The David (above) was transferred to the Academia in Florence as long ago as 1873 (in its old home, the Piazza della Signoria, it has been replaced by a copy), while the peerless bronze equestrian statue of Marcus Aurelius has only been moved from the centre of the Piazza del Campidoglio to the adjacent Capitoline Museums within my Italy-visiting lifetime. The various statues of saints by the likes of Ghiberti and Donatello that use to adorn the external niches of Orsanmichele in Florence are elegantly displayed in a space above the main body of the church. When I recall – many years ago – daring a gymnastically-inclined friend to climb up and insert an ice-cream cone into the right hand of Donatello’s Saint George to stand in for his now missing lance, this may be no bad thing, for all that he resisted the temptation. 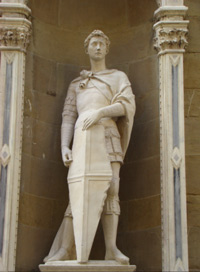 This list of superlative outsiders who have become insiders could be extended, but it does not begin to compare with what remains. The two marble statues of the Dioscuri or Horse-Tamers on the piazza at the top of the Quirinal Hill in Rome take a lot of beating, both in terms of historical significance and sheer scale. The may not actually be by Phidias and Praxiteles, as was believed in the Renaissance, but they are genuine antiques and must always have stood where they are now (the figures are over 5.5 metres tall, which would have made moving them something of a challenge). Similarly, the two great Renaissance responses to the ancient Marcus Aurelius group, Donatello’s Gattamelata outside the basilica of Santo in Padua and Verrocchio’s Colleoni in the Campo Santi Giovanni e Paolo in Venice, both remain exactly where they were in the Quattrocento.

The Loggia dei Lanzi, on the aforementioned Piazza della Signoria in Florence, still retains Benvenuto Cellini’s Perseus and Giambologna’s Rape of the Sabine Women, respectively perhaps the most important bronze and marble groups of the second half of the sixteen century, and much else besides. 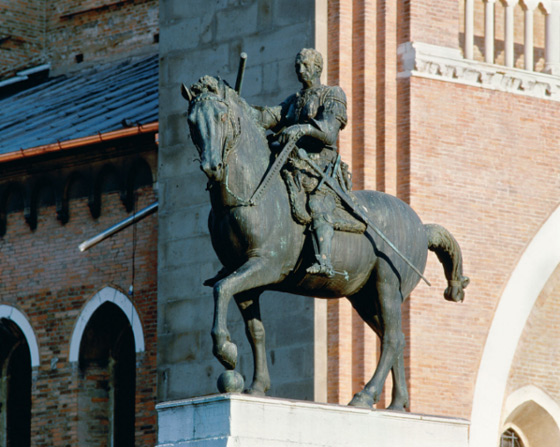 Here are exceptional high points, but there are also any number of wonderful surprises on offer to anyone willing to keep their eyes peeled. Among my personal favourites is Nicolas Cordier’s grand bronze statue of King Henri IV of France outside the Lateran in Rome or the electrifying paired equestrian bronzes of Ranuccio Farnese and Alessandro Farnese by Francesco Mochi in Piazza Cavalli (the Square of the Horses) in Piacenza.

A different pleasure is afforded by sculptures of somewhat lesser distinction at the heart of fountains. It is true that the monumental bronze figure of the sea-god on Giambolgna’s Neptune Fountain in Bologna is as good as it gets as pure art, but when in Rome Bernini was producing some of the finest of all fountains – the Triton, tragically marooned by traffic nowadays; the Four Rivers and the Moor in the only slightly less hectic environment of Piazza Navona – the execution was in part delegated to assistants. The same sense of an entirely acceptable as opposed to celestial standard of workmanship is true of the Trevi Fountain itself, where the grandiose overall effect – and that includes the sound of water flowing and splashing – is what counts. Last but not least, it seems only right and proper to conclude with Bernini’s Tiny Fountain of the Bees (they were the emblem of his patron, Pope Urban VIII) at the bottom end of the Via Veneto to underline the fact that in this context is not everything.

It is a moot point whether garden sculpture should be allowed to feature in a brief overview of the al fresco delights that are to found in many an Italian town, but the Boboli Gardens are genuinely urban as opposed to rustic. They are filled with sculpture, but – for me at least – one can compare wit the Gioco del Saccomazzone, which is the work of another Mochi, Orazio this time, in collaboration with one Romolo Ferinando del Tadda. It represents some kind of crazy baroque Italian variant of the gam (played with rolled up newspapers) of ‘Are you there, Moriarty?’ The very thought of it makes me long to jump on a plane tomorrow.

This essay was originally posted on the Luke Irwin blog.